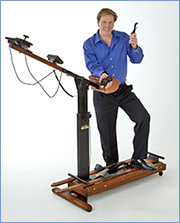 The inception of NordicParts dates back to when I was a NordicTrack employee in Chaska, Minnesota in 1992. Back then, my duties included delivering skiers to photo shoots, prototype parts to manufacturing facilities, and important documentation to just about any company that NordicTrack had dealings with. During that time, I became very familiar with the vendors that helped NordicTrack achieve its great success. As my position progressed within NordicTrack, I became responsible for transporting vital parts and documents between the different NordicTrack facilities in Chaska, Belle Plaine, Saint Peter and Glencoe, Minnesota. During that timeframe, I developed a deep understanding and experience for which parts were premium-quality and which parts were not. I continued to work for NordicTrack until October of 1998 when CML NordicTrack filed bankruptcy. After the doors closed, I was asked to help organize NordicTrack’s assets for the liquidation auction.

Helping with the liquidation auction is when I had the vision to create Nordicparts.com. I acquired the vendors list of companies who supplied NordicTrack and purchased a large number of replacement parts at the auction. I consulted with one of my ex co-workers who had been the main repair technician for the ski machines and he shared with me his precious knowledge of tips and tricks on repairing the skiers.

By this time, my vision for Nordicparts.com was turning into a reality. I had the parts, vendors and knowledge — the one crucial element missing was a store. I decided that the internet was the most viable way to reach my future customers. I hired a web designer to develop my first website, which was very crude. The first website showed me the true potential of Nordicparts.com and I knew I really had to expand, so I invested in my current website, which accepts secure credit card payments and PayPal®. I have invested substantially in remanufacturing many of the parts for the ski machines, which are now listed on NordicParts.com and pride myself on using U.S. companies to provide those quality parts. I had a vision, stayed focused and never gave up on my dream.

Nordicparts.com is who I am and giving my customers the ultimate in customer service and parts is what I do.

Please visit our FAQ and Hints and Tips section to learn more about your skier.

International shipping can vary on country.

$5 shipping for any domestic order under $50

Free shipping for any order domestic over $50